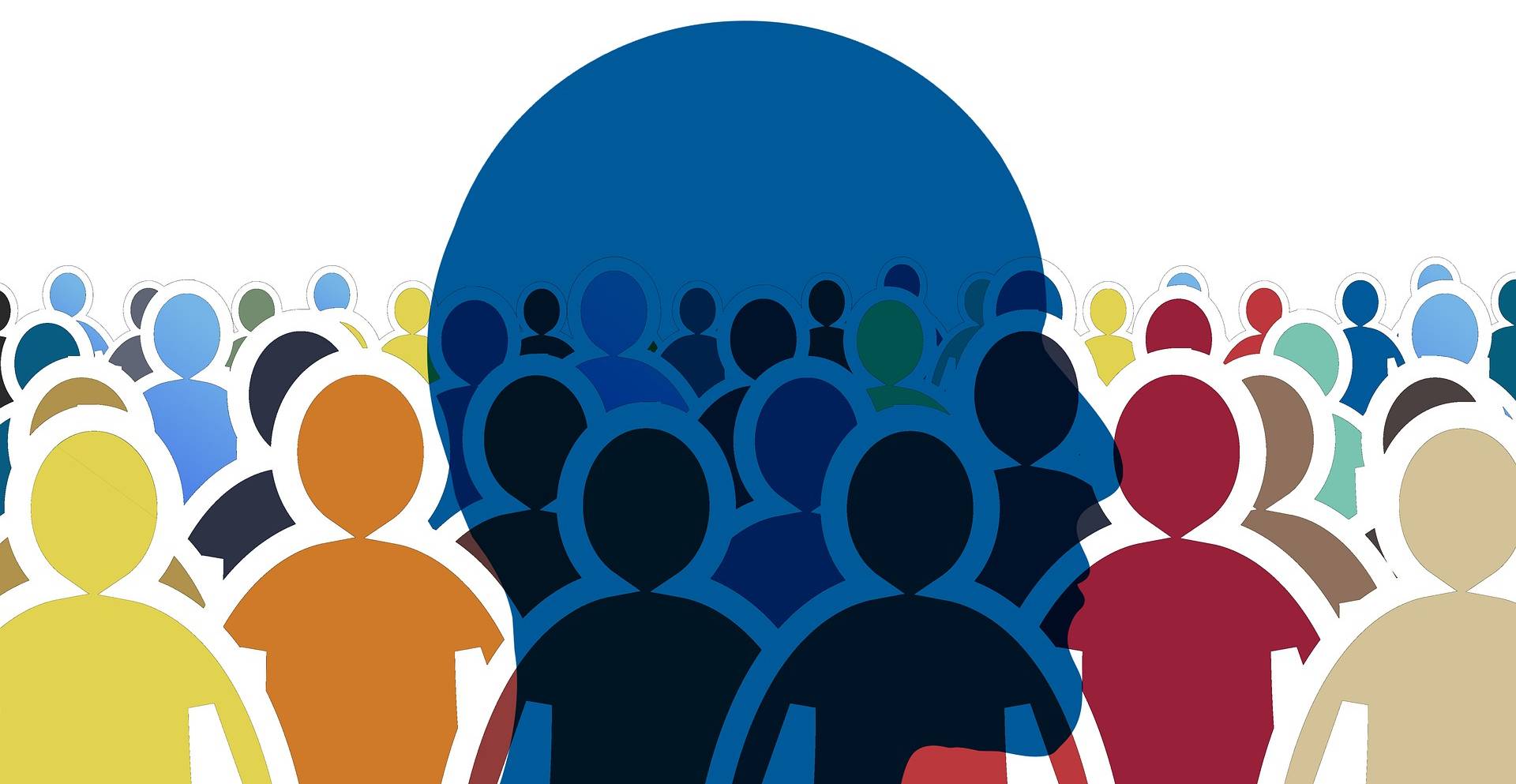 In situations where you may need to mingle with other people, social anxiety can take over and can be mentally and physically crippling. It can affect negatively your relationships with your friends and family and may also stunt your career growth. One other extreme effect of social anxiety is you may be reluctant or be fearful to leave the premises of your home.

There is a solution to your problem. There is now the proven treatment of hypnosis for social anxiety. Because social anxiety can also destroy how you look at yourself, there is also self confidence hypnosis which will help you get back to your old productive and cheerful self.

Hypnosis has been a proven and is a very powerful tool which helps change behavior and can manage effectively both your physical and physiological issues associated with your social anxiety disorder.

You may have heard about myths connected with hypnosis, but it has been a valid and proven tool in clinical psychology. Hypnosis can help you relax and has the ability to put you in a state of focused concentration and awareness. When you are in this frame of mind, hypnosis for social anxiety will enhance your ability to accept positive and transforming suggestions that remain embedded with you even when you are no longer in that hypnotic state.

Tammy has helped many clients with social anxiety and self confidence over the years. She offers a free phone consultation to talk to you about hypnosis and what it feels like and then conducts the sessions via Zoom to help you move past your social anxiety. 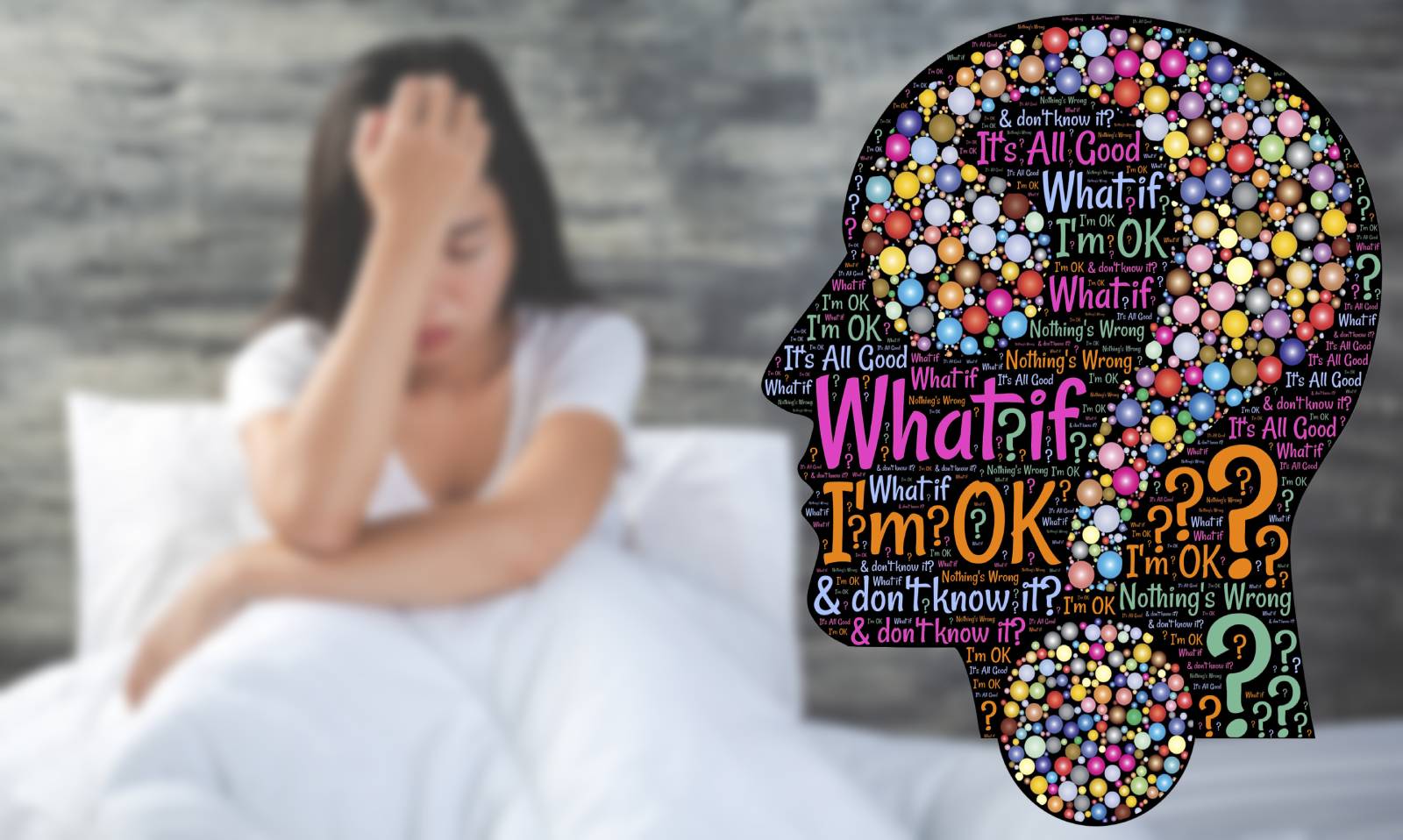 There are several case studies about hypnosis for social anxiety and self confidence hypnosis that have been published in academic journals. One such recent study discovered that after several months of hypnotherapy, the subjects were able to engage professionally and socially in a manner that was not even remotely possible before the treatment. After a 6 month follow up on the effects of the hypnosis, the gains have been sustained.

Another study involved subjects who don’t want to take medication for their social anxiety. So they accepted the invitation to take part in a study and began hypnotherapy treatment. They used breathing techniques and visualization in conjunction with hypnosis to calm down their anxious feelings. The subjects showed vast improvement after only a month, though they still showed some struggle when they are in the midst of crowds. But after a 60 day follow up on the effects of the hypnosis treatment, they were already free from all symptoms of social anxiety and lack of self confidence.

Clients who accept hypnosis as their social anxiety treatment may be requested to visualize a memory or a situation which calms them. They can reexperience these pleasant memories whenever they need them in the course of their day. The professional hypnotist may also give suggestions to relax and feel calm. The clients are also encouraged to be in control of their emotions during social situations which have provoked anxiety in them. The clients can do these suggestions by themselves, but their hypnosis sessions with Tammy can make these suggestions more powerful and effective because they will receive these messages in a subconscious state.  Confidence is anchored in for when you are out in public.

If you believe hypnotherapy can help you with your social anxiety and self confidence issues, contact us and we will be glad to help you.

Now You Can Schedule Your Appointment Online.

Hear from a long time client about the benefits of remote hypnosis sessions in the comfort of your home.

*30 years and I haven’t slept thru one whole night until hypnosis.  Tamara’s voice is so peaceful.  I feel so relaxed.  I’m eating healthy and drinking water.  And I even started exercising.  I feel so good about myself.  Don’t have that bloated feeling.

*It’s been a wonderful experience for me and every session I’ve seen dramatic results.  I’ve gotten rid of a lot of fears and blocks released and seen a lot of opportunities open up for me.  I highly recommend you coming.  She has a wonderful soothing voice.

I’m having great success after 2 sessions

*I’m having great success.  Came with the idea of being motivated.  After 2 sessions I haven’t had any potato chips, and cut back on saltines.  Those were biggies for me.  Went to our favorite restaurant and ordered water.  That’s major.  I’m more self confident and very proud of myself.  And close to being motivated to exercise.

*I did not think I could be hypnotized but boy was I wrong! It was a great experience-hard to describe-but very pleasant and relaxing– also kinda “trippy” to use a phrase from the 60’s lol. Thank you Tammy.

Bridge fear no more. Able to ride across the Skyway and look out at the water with no fear.

*I went to Tammy to get relief from a life-long terror of bridges. After just two sessions, I was less anxious when crossing bridges. After the third session, I was able to ride across the Skyway bridge (which previously had put me in a huddle on the floor of the car) and even look out at the water without being afraid. Thank you, Tammy!

Best hypnosis I’ve ever experienced! She is THAT good!

*Wow!… Tammy is amazing! I was hypnotized by her 5 years ago and came back to her with a different issue because she is that good! The whole experience with the headphones and Tammy’s voice was phenomenal! She’s given me the best hypnosis I’ve ever experienced!

*Absolutely Life Changing. I Am enjoying life much more now and appreciating all that comes my way. If you want to change what is around you and the experiences you have you must verse change your habits and thoughts inside. Tammy is a wonderful person and will help you see that.

*I have had two sessions with Tammy to deal with anxiety issues. I am feeling so much more relaxed and have a positive state of mind. Tammy put me at ease, answered my questions directly and truly seems to care about my success. I am very pleased with this experience.

*This was an incredible experience! Health, wealth, success hypnosis. Tammy is unbelievable and have never been in that state in my life. She was extremely helpful and customized exactly what I was looking for. Thank you Tammy, I will be back!

Can you say amazing?!

*Met Tammy for the first time yesterday. Feel like I’ve known her all my life. She is so real and down to earth. Can’t wait to work with her, and use her as a very important tool in my weight “release” journey.

Hypnosis for motivation. It worked great!

Great & fast results ! I went to hypnosis to try and get myself motivated, I wanted to get there but needed a little push, so I tried hypnosis. It worked great ! The sessions are very calming and comforting and without even realizing it on the spot, your subconscious takes in whatever you want to work on ! Come in ready to change what you want to change and the tailored session will bring results much faster than you might think !

*It was my first time. I was skeptical but hopeful. On the drive home I was surprised to find positive thoughts coming into my mind. I wasn’t trying to make anything happen, just staying open and it worked! Eight hours later it’s still working.

Tammy has helped me overcome so many things

*I needed to see Tammy to control my stress and for weight loss. I had gained a lot in the past year. After talking with her at the consultation, she had already given me “homework” to help with the session I schedule for a week later. The actual session was VERY pleasant. I felt wonderful after I left. I noticed changes the next day. I was not eating as much and felt a sense of well being. I will definitely go back to her!

She is the Greatest! Whatever problems you might have she can help you overcome them.

*Was having trouble staying focused and also the stress levels that I experienced were becoming overwhelming. Thanks to a session with Tammy, these problems are starting to abate. She has given me techniques to continue fighting these two problems. Whatever problems you might be experiencing, Tammy can help you overcome them. TAMMY IS THE GREATEST!!! 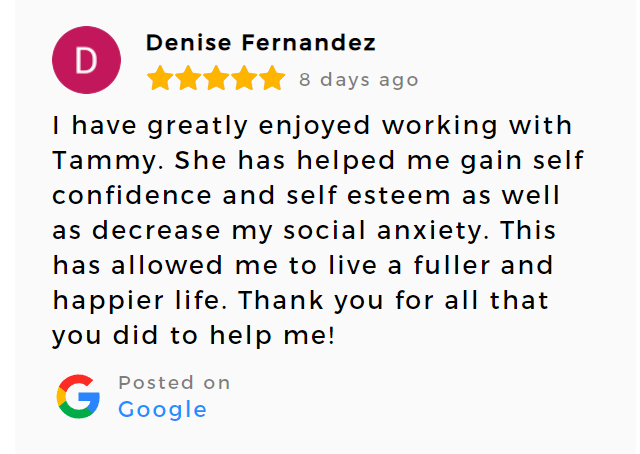 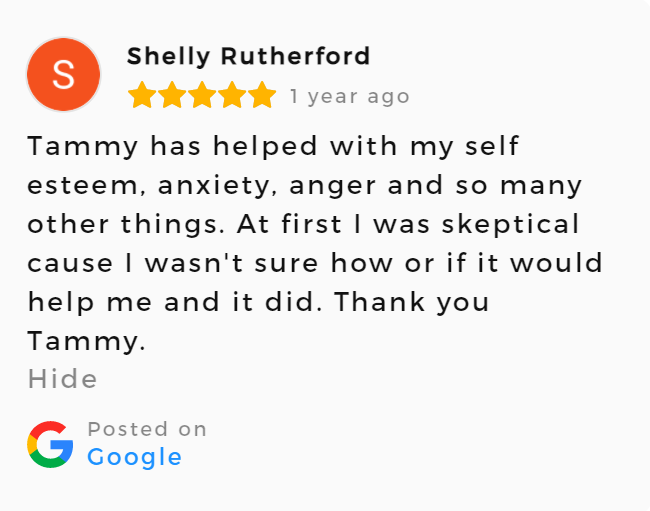 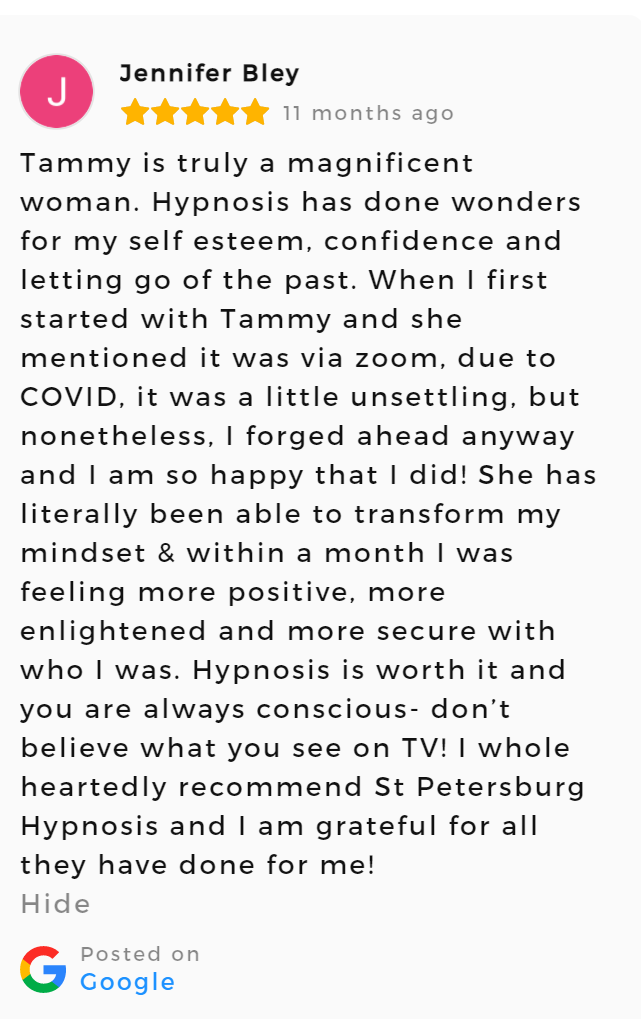 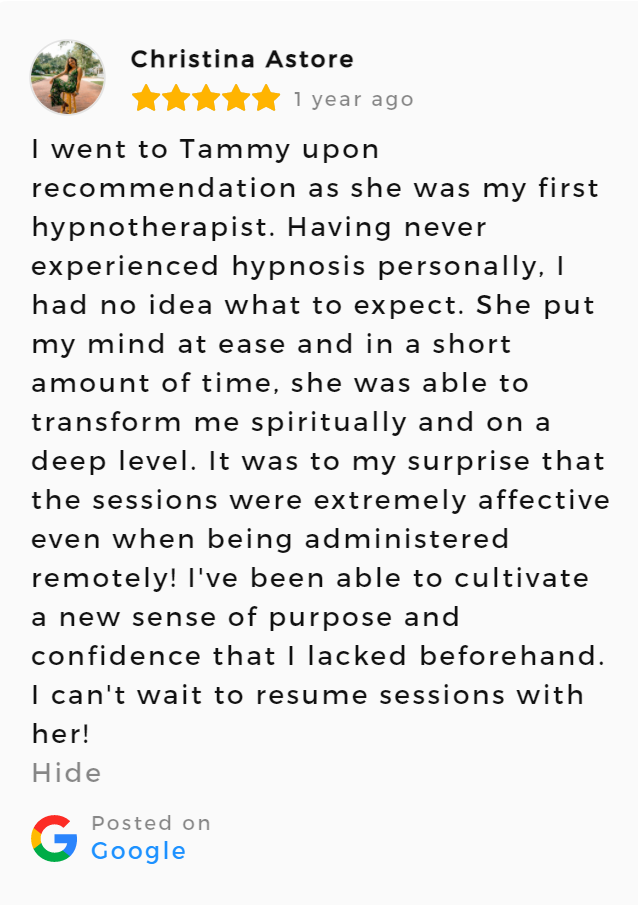 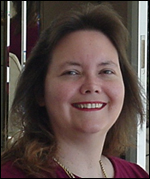 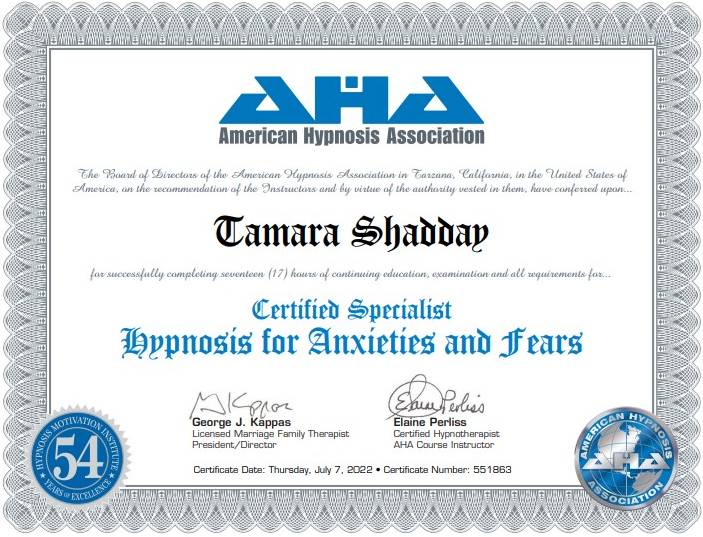