The common fear of public speaking is called glossophobia (or, informally, “stage fright”). As Jerry Seinfeld said: “The average person at a funeral would rather be in the casket than doing the eulogy.” 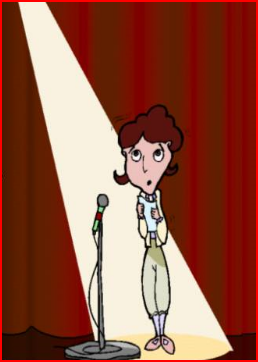 When you speak in public, do you experience…

Many people want to know,

“can hypnosis help me conquer my fear of public speaking?”

The answer to that is a resounding “yes,” hypnosis is a proven method for overcoming stage fright.

For one reason or another, an event or thought in your past, and your brain has learned to provide you with this fight or flight response when you speak in public.

Instead of appropriate levels of adrenalin and excitement to optimize your performance, you get a fear response like you’re being attacked or are in danger.

Everything in your body and mind is saying “run away!!!”. But you can’t, you have to ignore your ‘fight or flight’ response and stay put and give your speech. And what’s more, you hope to sound eloquent and informed. Not easy. Pretty Impossible in fact with the way you have been programmed.

So here’s what we do about it…

Your brain simply needs to be re-educated into the right sort of reactions for public speaking. We teach your brain how to alter it’s adrenalin response to the stress of the public speaking situation – how to produce an appropriate amount of adrenalin so that you can perform at your best. With the use of Hypnosis you can release this negative pattern and reprogram the subconscious mind (That is where all habits are formed) with the new behavior of self confidence in public speaking…

Best hypnosis I’ve ever experienced! She is THAT good!

*Wow!… Tammy is amazing! I was hypnotized by her 5 years ago and came back to her with a different issue because she is that good! The whole experience with the headphones and Tammy’s voice was phenomenal! She’s given me the best hypnosis I’ve ever experienced!

*It’s been a wonderful experience for me and every session I’ve seen dramatic results.  I’ve gotten rid of a lot of fears and blocks released and seen a lot of opportunities open up for me.  I highly recommend you coming.  She has a wonderful soothing voice.

Bridge fear no more. Able to ride across the Skyway and look out at the water with no fear.

*I went to Tammy to get relief from a life-long terror of bridges. After just two sessions, I was less anxious when crossing bridges. After the third session, I was able to ride across the Skyway bridge (which previously had put me in a huddle on the floor of the car) and even look out at the water without being afraid. Thank you, Tammy!